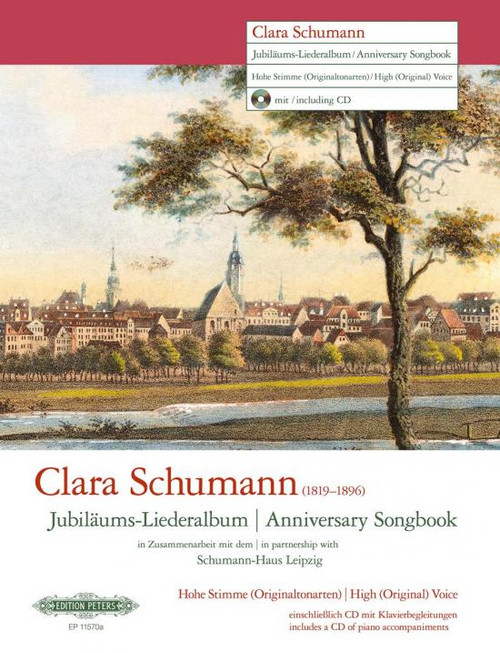 Clara Schumann (née Wieck) was undoubtedly the most important female pianist of the 19th century. As a young child she toured Europe as a prodigy: her entire career as a celebrated piano virtuoso spanned more than 60 years. Equally important, but less well known, is the composer Clara Schumann, who published her Opus 1 at the age of eleven. Despite the domestic duties expected of a woman at that time, she created numerous outstanding piano works and songs that are at least the equal of those of her male contemporaries. However, society at that time did not allow women to be regarded as fully-fledged composers or for their works to be appreciated adequately.

To help give this important composer the recognition she deserves, Edition Peters, in collaboration with the Schumann-Haus Leipzig, is now, on the occasion of her 200th birthday, publishing this Anniversary Songbook. The 14 songs, representing the pinnacle of Clara’s art, were composed mainly in the period after her marriage in Leipzig to Robert Schumann – who was her greatest champion.

Complementing the printed volume, interactive features and content will be available on the Tido Music iPad and desktop website. Designed to encourage singers to explore, learn and practise new repertoire, scores are synced with professional piano accompaniment recordings and innovative practice tools.

Schumann, At the Piano with Robert and Clara Schumann [Alf:00-1200]