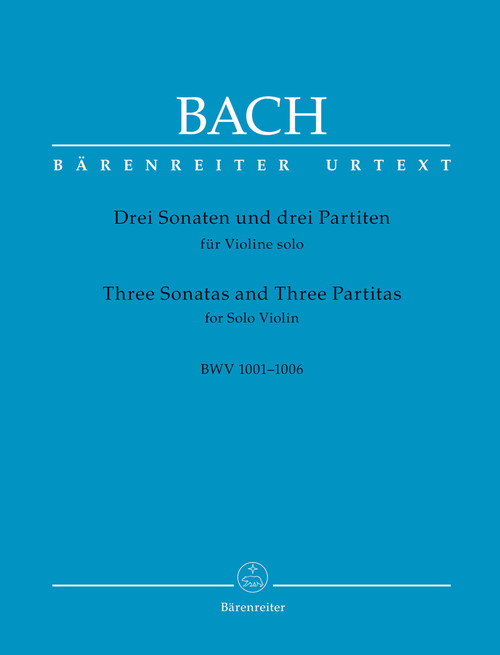 Bach, Johann Sebastian
Three Sonatas and Three Partitas for Solo Violin BWV 1001-1006
Urtext from the New Bach Edition – Revised (NBArev)
- The Bärenreiter standard edition, revised and newly engraved
- Based on most up-to-date state of research as published in the New Bach Edition – Revised
- With an informative Preface by Peter Wollny (Ger/Eng)
Without any doubt J.S. Bach’s cycle of the three Sonatas and Partitas BWV 1001-1006 represents one of the pinnacles of classical European music. According to C.P.E. Bach a contemporary voice stated that there was „nothing more accomplished in order to become a good violinist“ than his father’s works. The cycle reflects the entire harmonic and polyphonic musical universe of Bach’s time, so masterfully composed that it can be rendered within the limited framework of but a single instrument – the violin.

The new publication of the Sonatas and Partitas BWV 1001-1006 (BA 5256) constitutes a complete revision of our older edition (BA 5116). The musical text has been edited by Peter Wollny and represents the most up-to-date state of research as published in the New Bach Edition – Revised (NBArev), volume BA 5937-01. The edition is mainly based on Bach’s unusually clear autograph which is considered among the most beautiful manuscripts by the composer. All relevant secondary sources have been taken into consideration in order to clarify ambiguities. These include five contemporary copies, including one by Anna Magdalena Bach, and four manuscripts from the late 18th and early 19th centuries.

The musical text has been newly engraved with a clear and generous layout, whereby page turns and pagination have been retained from the previous edition. This allows the straightforward navigation between a copy of the previous and this new edition. The detailed Preface (Ger/Eng) provides information on the genesis of the Sonatas and Partitas, their context and the sources.
Edition no. BA 5256
ISMN 9790006561605