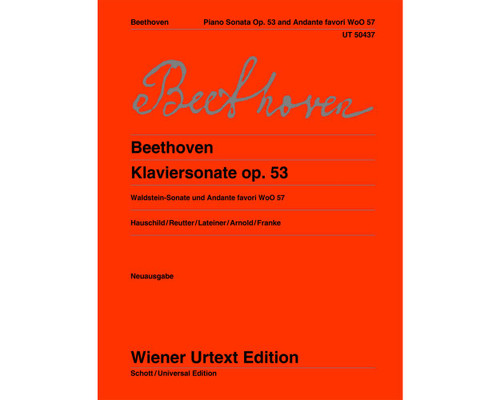 Beethoven's Piano Sonata in C major, Op. 53, called Waldstein Sonata, is one of the highlights of piano music. The large-scale work was originally much more extended with its large Andante middle movement, so that Beethoven finally decided to replace the Andante with a relatively short Adagio introduction to the Rondo finale. In addition to the final version of the Waldstein Sonata, this new edition also includes the original middle movement, published separately by Beethoven and later called Andante favori (WoO 57). Because it may seem appealing to play the sonata in this early version and discover the unprecedented dimensions to which Beethoven had pushed the genre of the piano sonata. Alternatively, it may be attractive to combine the final version of the Waldstein Sonata with the Andante favori as a stand-alone piece in one and the same piano recital. This edition is essentially based on the autograph and the first edition as well as Haslinger's complete edition, which is important in detail. Nils Franke's notes on interpretation direct attention to the time when the work was created and to its earliest reception, and thus take a critical look at all too familiar performance conventions.