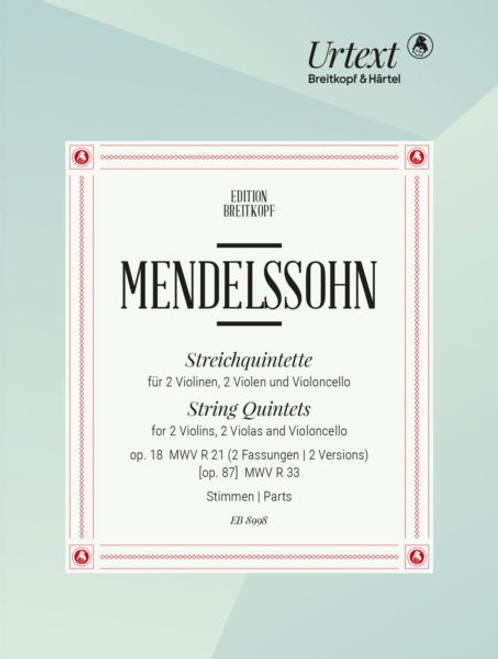 Urtext based on the Leipzig Mendelssohn Complete Edition edited by Clemens Harasim [2vl,2va,vc]

Felix Mendelssohn Bartholdy devoted to the string-quintet genre only two works sharing quite a few formal and musical similarities, though they were composed almost two decades apart.

In view of Mendelssohn’s strong revising obsession, the quintets pose some challenges to the editor: in the A-major quintet, after he replaced an inner movement and switched the order of the movements from the early version, a somewhat recognizable “final version” was published in 1833; the B flat-major quintet underwent several further rounds of revision after its provisional conclusion in 1845, presumably extending into the year of the composer’s death (1847). The set of parts includes beside the second string quintet in B flat major both the complete early version as well as the complete published version of the first quintet in A major, so that both versions can be played as independent works. Appearing alongside the parts edition to facilitate further engagement with the music text is also a study score.