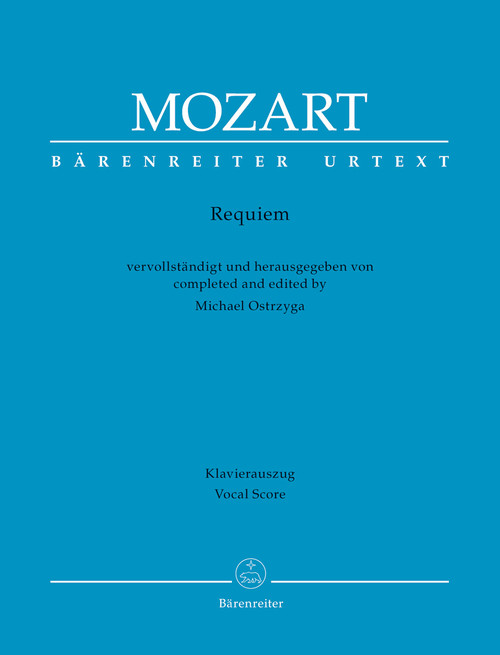 This publication offers a source-critical edition of Mozart’s fragmentary “Requiem” as well as an alternative to the traditional Süßmayr version. It makes it possible to perform 1) the fragment, identified in print in both the score and the parts, 2) the authentic sections left incomplete by Mozart, now in a stylistically appropriate orchestration, and 3) those sections missing entirely in the fragment, newly added in Mozart’s idiom taking into account historical additions by Süßmayr and Eybler.

When completing the fragment, the editor drew on comprehensive comparative and analytical studies of Mozart’s church style and compositional workmanship. The influence of Handel and Bach manifested in his final years, particularly in the “Requiem” fragment, is taken into account in those sections requiring completion or fresh composition.

At two points readers may choose between alternative movements (or sections), since proceeding from Süßmayr’s historical version, two divergent options cannot be weighed against each other but each one may well reflect Mozart’s intentions: the “Lacrimosa” may end with or without “Amen” fugue, and the “Sanctus” may begin in the customary D major or in D minor. Above all, this makes it possible to retain the B-flat major “Hosanna” from Süßmayr’s autograph, a movement which, until now, has not been appreciated as compositionally flawless.

• Scholarly-critical edition of the “Requiem” fragment
• With performance material for presentation of
1) the fragment,
2) a version with completions of the authentic Mozart sections or
3) a full completion consistent with Mozart’s musical idiom
• Missing sections were completed by drawing from other fragmentary sacred works by Mozart
• Added or completed sections incorporate influences from Bach and Handel already detectable in the fragment
• Alternative performance options for the “Lacrimosa”, “Sanctus” and “Benedictus”
• Easy-to-play piano reduction
• Extensive foreword (Ger/Eng) on the work’s history, reception and modern completions, with analytical stylistic critique
• Detailed Critical Commentary (Eng), partly available on the Bärenreiter website
• Tried and tested on many occasions, e.g. at Harvard University, the Rheingau Music Festival, the Monadnock Music Festival (New Hampshire), in Salt Lake City (Utah), as well as in radio broadcasts (NDR, SWR, WDR) and CD recordings with Concerto Köln, Chorwerk Ruhr and Florian Helgath (“Le Disque classique du jour” from francemusique.fr and three nominations for Opus Klassik 2021 in the categories “Ensemble”, “Choral Recording” and “Editorial Achievement”)