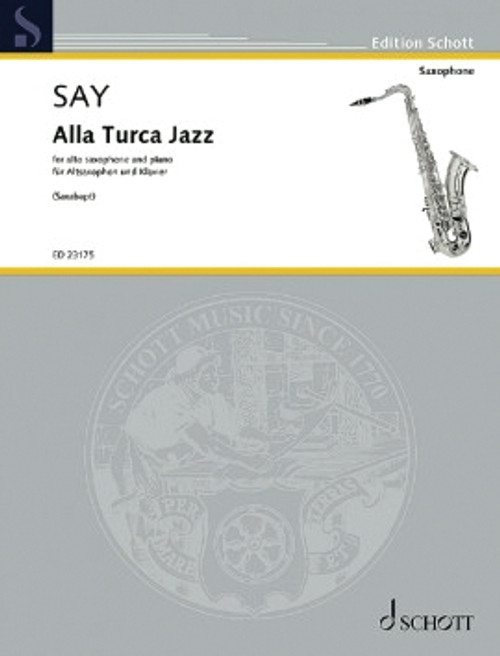 Alla Turca Jazz Op. 5b.
Fantasia on the Rondo from the Piano Sonata in A major K. 331

Fantasia on the Rondo from the Piano Sonata in A major K. 331 by Wolfgang Amadeus Mozart

Version for alto saxophone and piano by Saxabapt (2018) based on the original version for piano (1993).

The final movement of the Sonata in A major KV 331 by Wolfgang Amadeus Mozart, the Rondo Alla Turca, is one of the most famous piano pieces of all time. Once only familiar to musical experts, later a universal piece for all piano pupils, its opening melody is now even omnipresent as an alienated sinus tone-like mobile phone ring tone.

Fazil Say's arrangement, originally created as an effective encore, follows on from this popularity. After the first eight bars have been presented in original form, typical elements of jazz superimposed on the still recognizable classical foundations can be discovered, such as syncopation of the top notes and ornamentation through chromatic blue notes, embedded in the at times frenzied chains of semiquavers. In the spirit of the work's improvisatory character, Say likes to perfom his Alla Turca Jazz in different combinations, for example accompanied by jazz singers of with orchestra.

It may appear strange that Fazil Say, who was born in Turkey and - when not on tour - still resides in that country, does not bring back Mozart's interpretation of genuine Turkish music closer to its own roots, particularly as many of his compositions such as Black Earth or the Violin Sonata are characterised by a subtle amalgamation of the Classical-Romantic tradition, Turkish folk music and elements of jazz. In a further Mozart arrangement, the ballet music Patara premiered in Vienna in 2006, composed on the basis of the Rococo-like theme from the first movement of the same A-major Sonata (wich enjoys almost as great popularity as the Alla Turca theme), Say utilised the connection which was absent in Alla Turca, albeit in the opposite direction. In the ballet music, the piano symbolises Western culture and the Ney flute Oriental culture, communcated atmosperically by austere percussion instrumentation and soprano vocalisation.

The present arrangement now also includes a version for alto saxophone and piano.